By Karen Ciula and Alan Hersh (with an update by J. Kerr) 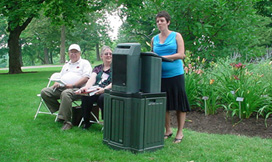 In 2004, a number of members of the Metropolitan Columbus Daylily Society (MCDS) began to discuss the need to establish a public educational display garden for daylilies in the Columbus area. Prior to this time, a daylily garden had existed at Inniswood Gardens, but was eliminated to construct the Sisters’ Garden. A daylily display garden was also established at Franklin Park for Ameriflora in 1992, but it was eliminated in 1999 due to upkeep and maintenance problems.

Discussions were held with Franklin Park Conservatory about the possibility of establishing some type of daylily display garden on the grounds of the Conservatory. A number of sites were considered. Suggestions as to the possible types of display gardens included a Top 25 garden and a Stout Medal garden. After much consideration, representatives thought that a garden featuring Ohio daylily hybridizers might be the best direction to follow.

A committee of MCDS members met in March, 2005, to formalize a plan for the display garden. The concept of an Ohio Daylily Hybridizers’ Garden was adopted by the committee as part of the celebration of the 20th anniversary of MCDS. Barbara Arnold, a horticultural design associate with the Conservatory, attended a meeting and presented a plan to create five display beds to be located adjacent to the Tour Entrance of the Conservatory. Her plans also included the addition of other plant materials to add structure to the beds.

The plan adopted highlights an historical approach to displaying the work of the Ohio hybridizers. The garden consists of a bed featuring daylilies from the 1920s through the 1970s; beds for the 1980s, the 1990s and the 2000s; and a bed featuring American Hemerocallis Society (AHS) award winning daylilies.

Research was conducted using the registration record books of the AHS to identify all those individuals who had hybridized and registered daylilies from 1893 until the present. An initial list of 65 individuals was created. Further research increased the number of names on the list to over 70 known Ohio hybridizers.

By the end of April, 2005, the five beds created by the staff of the Conservatory were ready to plant. MCDS members solicited donations to help fund the costs for signage, soil amendment, plant acquisition, and the eventual production of a piece of interpretive literature.

A list of potential plants for the garden was derived from the registration records, Eureka, and other plant catalogs, as well as on-line resources.

Hybridizers associated with the MCDS, the Ohio Daylily Society, and the Greater Cincinnati Daylily and Hosta Society generously donated their favorite introductions, and many members donated clumps from their gardens. By the middle of May the planting sessions began. Initial plantings installed 112 cultivars in the five beds. Planting was carried on into August and early September.

The MCDS dedicated the Ohio Daylily Hybridizers’ Garden in conjunction with its 2006 Annual Daylily Show. An application for approval as an official AHS Display Garden has been submitted and was approved in 2006. Future plans include the establishment of a Species bed, also near the tour group drop off area. Visitors are already impressed by the luxuriant growth and bloom of our favorite flower.

As of September 2007, there are 268 daylilies planted in the Ohio Hybridizer’s Garden. This includes 47 cultivars that have received national awards.

The garden was enlarged and renovated in the spring of 2006 and now includes a number of 2005 and 2006 registered introductions from Diana and Jamie Gossard, Richard Norris, JR Blanton, Mike and Sandy Holmes, Joel Polston, Ralph Haehn, Ken Blanchard, Dan Bachman and Gerda Brooker. The generosity of our Ohio Hybridizers has been overwhelming and we can’t thank them enough. Dan Bachman and Mike Holmes have also generously contributed many historic Ohio daylilies for the garden. 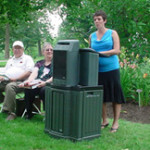